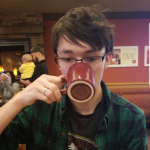 Many have noticed the road construction on Broadway Street near south campus. A project that took most of the summer to complete and ended with a road that looks… Completely the same?

Well, sources say that the supposed “road construction” was actually a coverup for something more magnificent. Sara Smith quotes seeing a “several foot tall thing,” erupting from the road near the end of the Spring semester last year.

Contradicting reports claim the “Thing” had wings, tentacles and/or scales. Artistic renditions are available at this time. Most commonly, the “Thing” was reported to be living, so that narrows it down from the undead.

When questioned, local construction workers denied any claims of Lovecraftian horrors appearing in the City of Menomonie at any time this last Summer.

Knowing that Menomonie is not currently at risk of a zombie apocalypse, vampire uprising or wraith invasion is a comfort to many.

Local Senior Timmothy Jims claims that the “Thing” was actually extraterrestrial in origin, but sources have yet to confirm this. “It leapt out of the ground and blasted my car with its Laser Vision. I ain’t never seen nothin’ like that ‘cept when the Greens kidnapped my Nana in ‘07.” Jims said.

Local fact-checkers did approach the site and confirmed that there was an abundance of dust and other organic material. When reminded that Menomonie is a central hub for students and residents year round, and that “organic material” is going to be found everywhere, the fact-checkers refused further comments.

Other sources claim that some of the above-stated material is actually fur reminiscent of a Bigfoot or Yeti. Upon approaching the local Sasquach hunters, arguments broke out on the etymology of the “Thing.”

“It could only have been a Bigfoot. There’s no way it could be a Yeti! They’re not native to North America and it’s way too warm in the Summer for one to come out anyways!” Christine Samthin, a local Bigfoot Historian, said.

She was countered by Sam Christian, a local Yeti Historian. “You don’t understand the repercussions of global warming. It totally could have been a Yeti that is fleeing its natural climate due to the melting ice caps and Himalayan Mountains. Don’t tell a Yeti how to live his life, Christine!.” Christian exclaimed.

Follow-up questions were not asked due to rising tensions.

So, whether the damage to Broadway Street was done due to an alien, Sasquatch or something else, we certainly know it was NOT due to routine maintenance.